Hydrogen for Vehicles It really works

Just imagine you could save up to 50% of your gasoline bill every month, how would that make you feel?!

This work transforms your car into a Hybrid, increase mileage and give your car more power. And the now self-cleaning motor with extended lifetime adds to the benefits of HHO.

By burning more of the fuel, we gain a noticeable performance increase and consume a lot less gas. Results vary depending on the vehicle. Highest cost savings are obtained in sub-urban and highway drives maintaining a fixed speed.

About HHO in Cancun

My eye sight has gotten really bad. In 2016, I started to look up after 20 years working on the Internet and concluded that I wanted to work in a different field. I needed something new that has an impact around me.

Seeing the incrementing prices for about everything, the idea to save money is a good starting point. Having worked in an avionics maintenance crew for 5 years, I know a lot about electronics and electric technology. And then I found out about HHO, which in a nutshell is Instant hydrogen generation for improved combustion in motors.

Researching this thema, after a couple of days I made the stunning conclusion that the technology is already widely in use in small shops and has for years been advanced from primitive over complicated to the point of simple. By now they have tried it all and the products that are sold today are operating for years without problems. Some even give livetime guarantees.

I was hooked and ordered a kit. I explain the results in the portfolio section.
Saving people's hard earned money, reducing smog and getting Cancún's mechanics additional work? It's a win win win situation.
I believe this way I can support the community I love in a constructive manner.

What is done under the hood is using electrolysis to split water into hydrogen and oxygen. The mixed gas has two parts Hydrogen and one part Oxygen, thus HHO, also commonly named Brown's Gas named after its inventor Yull Brown. This gas gets then cleaned and injected into the engine air intake in small quantities. The benefits are mentioned above.

Care has to be placed in the installation and setup. Modern cars have a sensitive, reacting electronic control unit (ECU) that will learn and compensate for the additional oxygen levels in the exhaust with sending more gasoline to the engine. Installing the VOLO Performance Chip will address the problem and by communicating directly with the ECU correct the Oxygen sensor signals.

From there on, the operation is complete and fully hands off. Taking care of filling the water supply tank every 1000 km and get a yearly replacement of the electrolyte is all it take to save serious money. Your monthly budget will improve dramatically.

The first electrolyzers were build in mason jars. Their deficits can be seen after operation for a couple of months. The main issue is electrode and contact corrosion. Since the whole unit including wires and contacts are in the electrolyte, they create leak currents in the liquid that reduce efficiency.

To address this deficits, the community invented the so called dry cells. All electrical connections and wires are outside of the box. The electrolyte is only in contact with the plate surfaces. Individual rubber seals separates and encloses each plate. 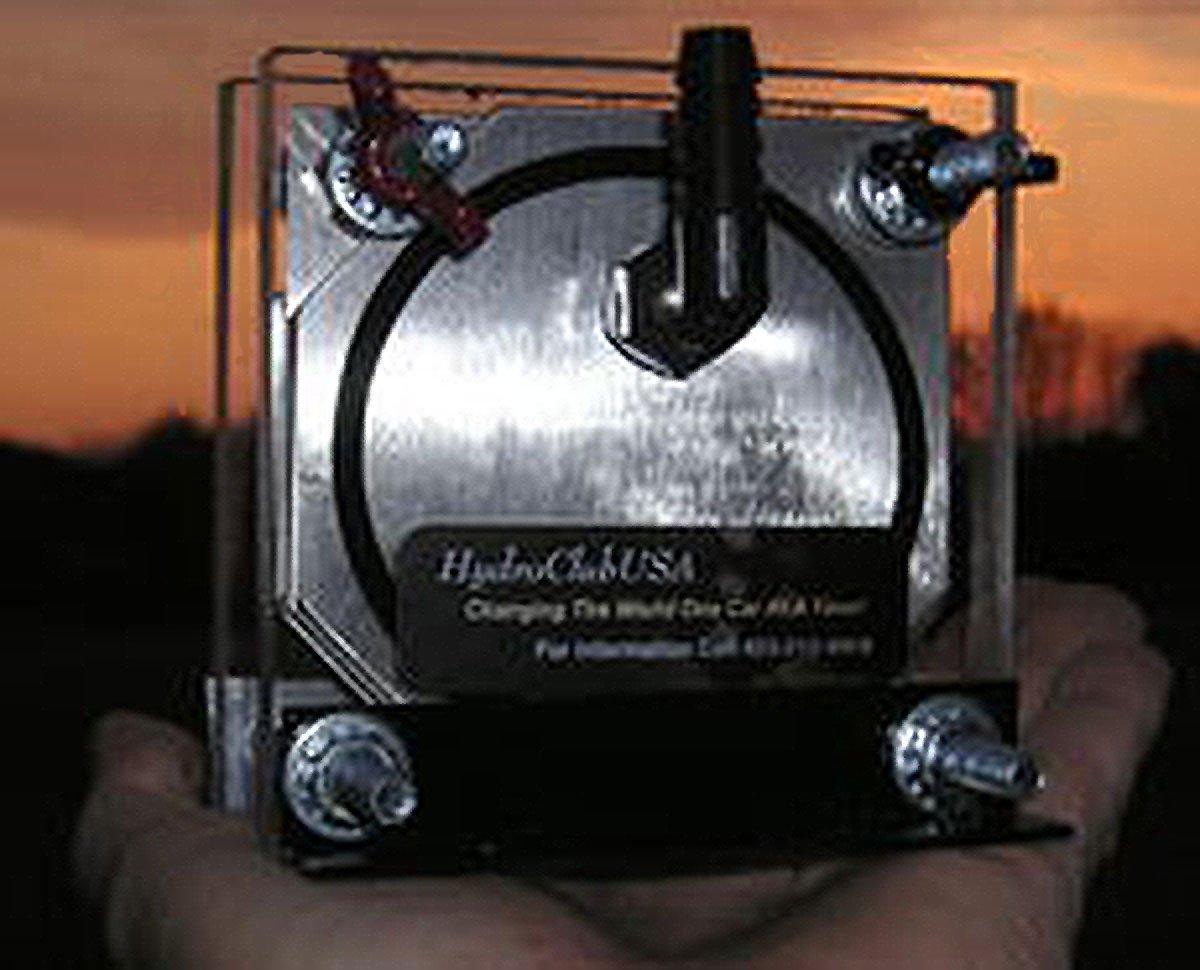 Lots of HHO providers selling huge 3-5 lpm generators. More is definitively less. When the system is not tuned and runs at up to full load, the amount of HHO gas is excessive and will cause wear on the electrolyzer plates, color and burn the electrolyte, cause foam to reduce performance and in general cause the engine to be less controllable. A 2 liter engine needs only 250 to 500 ml of hydroxide gas per min. And this is for highway consumption. City driving needs even less.

There are a couple more pieces required for a full HHO system, mainly a water tank, an ampere-meter, fuses, hoses, flame arrestors, a check-valve, cable and hose fasteners and the important, vehicle specific VOLO chip. The Pulse Width Modulator is an optional feature since we can just change the electrolyte concentration to limit the maximum current in the HHO generator. 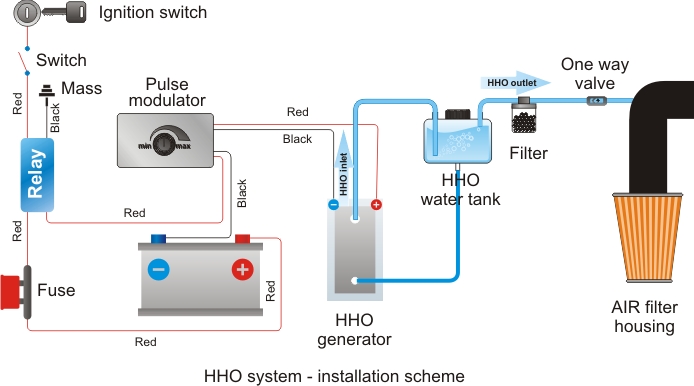 Details of the process:

Hydroxy gas (HHO), a precise mixture of hydrogen and oxygen, is generated from water on-board the vehicle, so the system begins with a RESERVOIR of distilled water (distilled to protect the components against harmful chemical deposits). Since pure water is electrically non-conductive, potassium hydroxide (KOH) is added to serve as an electrolyte, allowing the water to conduct an electric current and separate into hydrogen and oxygen.

Production of the hydrogen and oxygen gases occurs in the precision-manufactured Electrolyzer cell which contains 9 stainless steel plates accurately spaced by insulating gaskets. Water containing the KOH electrolyte is fed into the cell from the reservoir. When the electricity is applied to the cell, hydrogen accumulates at the negatively connected plates - oxygen at the positive plates. This Hydroxy Gas (2x h3 + O2) is piped out of the cell and fed into the engine's air intake, where it is drawn into the cylinders with the fuel mixture.

It has been measured and confirmed that a 20-25% fuel efficiency for any Internal Combustion Engine ( ICE ) is the current state of the art. That's it! Breaking, internal friction, heat losses and exhaust are wasting 75%-80% of the fuel.

We can not do a lot about breaking, internal friction and heat losses , but we can burn the 20% in the exhaust, the Carbon Monoxide and Hydrocarbons. Academic studies have been done on the effects of HHO gas on Internal Combustion Engines.

This has been first confirmed in a NASA study from 1977 ( can you believe that? ) and subsequently reconfirmed in Universities around the world:

The common conclusion is:

A mix of ordinary fuel with small amounts of hydroxy gas will improve the performance and mileage of any Internal Combustion Engine.

Critics mention the impossibility of running on electrolysis alone. They are correct. We don't try or do that: We ADD better AIR to the engine for improved fuel economy due to better combustion.

Promoting the knowledge and possible savings of HHO technology, installing the system in any Internal Combustion Engine, combined with lowering our carbon footprint gives me great pleasure.

If it is good for the Kids, it's good with me.